It's always strange when you finish the first draft of a script. There are all the questions like will it be long enough, will the actors like it, will we be able to make it work as a totally emotional performance and does it tell the story I want it to.
It's always more difficult when you are telling a story from real life where you have actually met the family. It is important to tell their relatives story to the utmost.
Taking archive records and shaping the hopeful truth from the story the records tell us is always interesting. With the three stories in War in Mind two have a reasonable amount of information and the third is a paragraph on a page. I hope I've managed to tell all three stories with compassion and life and that this performance will be true to the memory of the people.

An 8 year old boy in the asylum

We have been working with a group from Ageing Well - supported by Age UK and a history club from Archway School to look at Horton Road Asylum records from Gloucester Archives.
Whilst going through the 1917 admission records the Ageing Well group found an 8 year old boy labelled as a congenital idiot. He was the only child we found amongst the records which contained all manner of other patients from 80 year old women who had been in the asylum for 30 years to soldiers returning with "shell shock" - an actual definition on one admission - to women suffering because of "love affairs" and men who had been in prison.
The 8 year old was listed as being a "congenital idiot" which made the Ageing Well group think he may have had Downs Syndrome. The Archway pupils noticed his symptoms "shouting" and being "a danger to others" because he scratched them and wondered if perhaps he had tourettes.
It's difficult to know from a basic record what the modern day diagnosis would be but it is interesting how aware both groups from different generations are of mental health problems.
Having checked further details through Ancestry online sadly the boy died at the age of 12.

Posted by Unknown at 9:18 PM No comments:

Whilst looking through the records for the Gloucester Asylum in particular the case book there are times when you wonder what is classed as madness in the time of the First World War?
There are two cases which turned up which showed the sublime and the ridiculous.
The sublime - and it raises the question as to what treatment did he receive - is the soldier who's initial entry said the following:
"Suffers from incoherent ramblings and says that all he wants is to be shown a little kindness" Personally I think that is all any of us want in this world.
The ridiculous is very much stranger and again the initial entry for the patient says:
"Sings a lot and says this is because he was raised on bird seed. Also claims to be able to train animals. Has had most success he claims recently with training winkles" Strangely these aren't listed as "incoherent ramblings".
The case book lists almost 40 soldiers who were patients in the Horton Road asylum in 1917 - all suffering from different mental health problems from what "hearing voices" to what would now be classed as depression.

Posted by Unknown at 5:48 PM No comments:

Right to be scared?

Yesterday we visited the archives with the Ageing Well group (supported by Age UK) to look at Horton Road Asylum records and see what new people's stories we could find.
Amongst the records were a man who was described as "fearing he might be shot" as he wasn't yet in the army and was worried about being conscripted. There were also two women who were put into Horton Road Asylum because they were "worried about the Zeppelin raids".
On the face of it these three people all have rational fears. No one wants to be forced to fight and the first time bombing raids were carried out on the UK must have been terrifying. So why were they sent to the asylum?
The labels given like "incoherent rambling" would now be recognised as signs of depression or deeper paranoia and fear. The only solution was to lock people away and try and "relieve" their situation (the phrase in the case books from 1917 when people are released - "Patient relieved")
When we look at how far the treatment of mental health has come and with the present political climate I wonder how many people may be suffering in similar ways because of Brexit, the fear of terrorism, unemployment and poverty etc.
The question is how many people are living with this depression now with no help available for them or no recognition of their deepest fears.

Posted by Unknown at 3:27 AM No comments:

When you start looking through records of people's lives you realise how we can all be categorised.
William Charles Phillips records carry a standard document on them which any ordinary soldier who was classed as having neurasthenia (shell shock) had attached. This always has the same title on it that is shown above.
So a man who has, according to his records, paralysis is classed as a "dangerous lunatic soldier".
As the research widens there are statements from officers that those with shell shock are "worthless" to the army and it would be better if "they were shot". Thankfully not everyone felt this way.

Posted by Unknown at 8:53 PM No comments:

About War in Mind

War in Mind is a new project from Spaniel in the Works Theatre Company supported by the Heritage Lottery Fund and looking at the legacy of World War One through stories about shell shock.
The project came about when we discovered Tetbury driver William Charles Phillips who died of paralysis in Gloucester Asylum in 1917. He wasn't actively fighting and yet the things he must have witnessed left his completely paralysed. 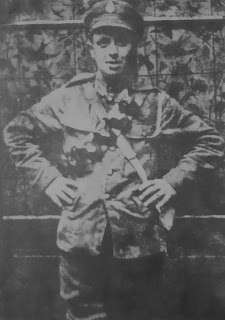 As part of the project we will work with groups to look at research material and family histories through a series of workshops.
There will also be family workshops to create new print artworks based on World War One images inspired by the linocuts of William Kermode.
More information about our events can be found on www.spanielworks.co.uk or on our War in Mind Facebook page.

Posted by Unknown at 4:01 PM No comments: